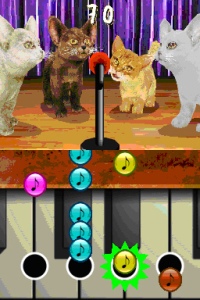 From the Tamagotchi to Nintendogs, the care of virtual pets has always been big business, spawning no end of variations on the theme- some sophisticated, some simplistic, but all sharing the common theme of forcing the player to carry out repetitive tasks in the name of caring for a simulated animal. Purr Pals is, of course, no different, giving you the opportunity to look after up to five kittens and see to their day-to-day needs- should you so desire to chain yourself to such a task.

Unsurprisingly, the first order of business is to adopt a kitten, so, equipped with the starting money the game kindly gives you, it’s time to pick one of forty different breeds of cat, customise its gender, markings, collar and so forth, and then take it back to its new home. The good news is that the different breeds of cat aren’t just alternate skins- they’ve all been programmed to have their own distinctive personalities, from lazy types with large appetites to active cats who demand boundless amounts of attention. The bad news, however, is that the customisation of a particular breed is not particularly extensive- you get about four or five similar looking colour schemes for the fur and some rather ridiculous colour choices for the whiskers (think lime green and pink) that ensure you’ll have to stick with plain white if you want a vaguely realistic looking cat.

Once you’ve paid for your new kitten, it will be sent to your home, a rather unexciting location consisting of four rooms- kitchen, bathroom, living room and garden. Your cat will wander between these rooms, but if you want it to go somewhere specific, you can pick it up with a disembodied hand and put it there. Just note- kitty likes to sleep between 11pm and 6am, and although you can still tend to it at these times, it will be more than a little disgruntled to be woken up.

Whether the power is turned on or off, your cat’s need levels will increase at an alarming rate- so much so that you can actually see them go up if you look at the game menu for a few minutes. Your demanding cat has four main needs- food, play, grooming and love- all of which must be attended to on a daily basis.

Each day you will get an allowance depending on how well you’ve cared for your cat- the base allowance is $5, with bonuses increasing it to $9 if your cat is in perfect condition, and penalties reducing it down to $0-1 if you’ve neglected poor kitty. Unfortunately, even the $9 allowance isn’t enough to pay for the two packs of cat food the average kitten needs to satiate its hunger, which forces you to constantly bring home money via games or cat shows (more on this later) just to feed kitty- let alone buy any of the other items on offer.

Since the game is sponsored by Purina, it should come as no surprise that your cat will constantly be hungry for bags of Purina pet food, consuming up to three packs a day (or more, if you play games with it). As well as the basic “Hungry Kitten” food, there are also slightly more expensive cat biscuits that will reduce the cat’s play, grooming or love needs; and indeed, once you start getting bored of the endless cycle of care, you’ll probably want to use these to combat rising need levels (although you can’t feed the cat infinitely to get rid of all its needs- like a real cat, it will refuse to eat once it’s had enough).

The main issue with food is that you can’t just give it to the cat in one press of a button- instead, you have to use the stylus to drag the box of cat food over to the bowl, and then keep shaking it until it fills with cat biscuits. As if this wasn’t bad enough, the game sometimes has an issue with detecting your motions, and promptly ‘snaps back’ the food box to its original position, forcing you to start emptying it out all over again.

Your house may be bland and clean, but somehow every day your kitten goes from shiny and clean to flea-ridden menace- so much so that you can see the fleas jumping about on it. In order to remedy this, you have to brush your kitten by rubbing the stylus over it until the meter empties- all within the time limit. The grooming process usually has to be repeated three times to completely empty the gauge, and the best way to proceed is to “scrub and scrub until it’s done”, making sure to brush the kitten all over.

Kitty requires love and attention, and in order to fulfil its needs, you’re going to have to give it a lot of stroking. In order to administer love, first tap the screen to tell the kitten where to go (you can have it sitting on a chair, watching the fishes and so forth), and then tap again to zoom in and begin stroking. If you stroke your cat in the right places, it will give off hearts- and the happier it gets, the more hearts it will emit. Keep going until the hearts stop (sometimes the hearts will get stuck on screen and refuse to go away, but they should clear if you exit love and re-enter, or if you just keep playing for a while).

Probably the most time consuming of all the tasks, playing isn’t even possible until you shell out for toys for your cat. Fortunately, it can also be quite fun- at least at first.

Every day your kitten will do what the manual euphemistically refers to as “kitten clumps” in its litter tray, and naturally it’s your job to clean it out. This can either be achieved via the cheapskate method of individually scrubbing out each ‘clump’ with the stylus (a task so oddly compelling that the entire family has been known to argue over it- although no one seems to have the same inclination to attend to the real litter tray), or the rich bastard method of buying cat litter and using it to magically clean the tray. The latter method also has the advantage of reducing the cat’s need levels in a particular area, but despite the promise that the different litters will help keep your cat’s needs down for 2,4, 6 or 8 days depending on the brand you buy, their effects never seem to last more than one day.

If your cat appears to be misbehaving itself (and the only time this has really happened for me is when it starts scratching at the screen because its needs are high), then you can actually encourage it to behave via ‘Discipline Mode’, which basically involves selecting a water pistol icon from the top of the screen and spraying poor kitty. Since this seems rather mean, I’ve only ever done it by accident.

You can also activate Discipline mode via the voice command ‘Bad Kitty’, although I can’t say that this has ever worked for me. The other two voice commands- ‘Here Kitty’ to make the cat come to you and ‘Meow, Meow’ to make it meow- seem equally unpredictable in their functionality.

One of the hardest tasks in the game is making a decent amount of money, with building your fortunes requiring considerable effort. Aside from your pittance of a daily allowance, the two main ways of making money are through mini-games and cat shows, both of which are time consuming for different reasons. The mini-games offer very little monetary reward (more on that in a moment), whilst cat shows require days of preparation in order to earn the big prizes.

Playing any of these games will further increase your cat’s needs levels, so it’s

best to do them before you care for kitty.

Once you have your fortune, you’ll probably be wondering what you can spend it on before it all gets drained by day after day of purchasing Purina cat food. Unfortunately, whilst there isn’t anything too exciting to unlock with your cash, there are a number of customisation options you can buy. As well as a limited amount of collars, tags, food bowls, beds, hats and comedy noses (no, really) for you to dress up your cat in, you can also redecorate your house with different colours and materials for the various furnishings therein.

For the truly dedicated, you can use your hard-earned cash to adopt up to five cats, although each cat must live in complete isolation in an identical house (it’s unclear whether each cat is moved from a limbo area into a shared house or whether they each live in separate yet identical houses that are all customised simultaneously but have personalised beds and food bowls). You can switch between cats using the start menu and donate unwanted cats if you have the cold heart to do so. It’s also worth noting that any unscrubbed ‘kitten clumps’ will transfer to the next cat’s litter tray when you load it up.

A word of warning

The bugs mentioned above are irritating but minor compared to what I am about to tell you- and that is that saved data on Purr Pals has a tendency to corrupt. It’s not for certain that it will happen, and it can go for months without issue, but for some reason once you start entering a lot of cat shows and unlocking numerous customisables, the game seems to decide it’s had enough- at which point all your hard work gets erased. At the same time, however, this can be a welcome release from the tedium you will be experiencing by that point.

As with all games of this type, after the first few weeks or even months of care, you’ll begin to find it more of a chore than a pleasure, taking up a precious 25-50 minutes of each day that you start to feel could be put to better use. At this point, you probably won’t want to play anymore, although it’s debatable whether you’ll decide to return to the game at a later date.

Although Purr Pals is on solid ground visually, the aesthetic appeal of the different cat breeds varies wildly- fatter cats tend to be cuter, whilst thin ones just look spindly and strange. A decent amount of effort has been put into the house, but ultimately it can’t disguise the fact that four rooms will get boring when there’s absolutely nowhere else to go. Meanwhile, background music is catchy in a slightly irritating way, but certainly nothing to write home about.

Although it isn’t up to the level of Nintendogs, Purr Pals is nonetheless a solid titles that stands out amongst the average dross that floods the virtual pet market. A sound alternative to the apparently disappointing Catz, Purr Pals is probably your best option if you wish to go into the business of caring for virtual cats.