After BoJack tries to kiss Diane on the way home from Malibu, things become awkward between them. Nonetheless, BoJack decides to press on with a plan to sabotage Diane’s wedding to Mr Peanutbutter, and enlists Todd to help him.

For me, BoJack has been a good show right from the beginning, but it’s in this episode that it really settles into its stride. The formula for most of season one has been to have a serious A-story, a “Todd’s antics” B-story, and of course lots of visual gags. Now the show settles into what feels like a more familiar BoJack template, of having lots of interwoven character threads going on simultaneously.

Let’s start by talking about BoJack. In this episode, he manages to do what BoJack does best – inadvertently pushing people away. His attempt to kiss Diane only leads to awkwardness between them, followed by an affirmation that they should definitely only ever just be friends. Diane even decides that she has enough material to write BoJack’s book, and won’t need to hang out with him any more. He tries to get Princess Carolyn to help with the wedding sabotage, but instead she ends up dating another person – “Vincent Adultman” (really three kids in a trenchcoat). BoJack doesn’t even want to go out with Princess Carolyn any more, but it feels odd to him that the option isn’t even there any more.

Even BoJack’s always loyal house guest Todd is starting to drift away from him. After BoJack hires Character Actress Margo Martindale to help with his latest scheme, Todd puts two and two together in a very circuitous and Todd-like way, and realises that BoJack sabotaged his rock opera. Although Todd has yet to confront BoJack about this, it does affect his actions for the rest of the episode. He pulls back from helping BoJack, even when he could have betrayed Mr Peanutbutter’s confidence and perhaps stopped the wedding. 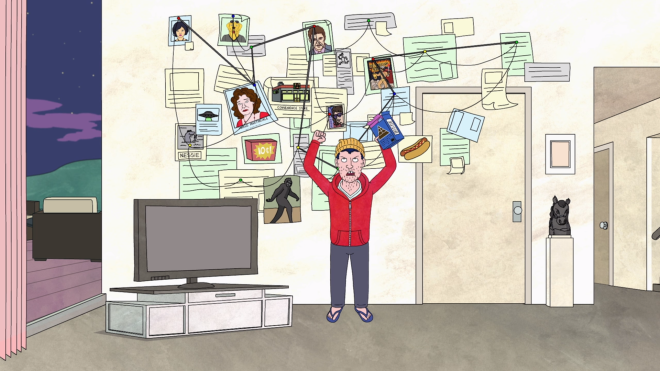 This episode is the first to really link up Todd and Mr Peanutbutter, with Todd becoming Mr Peanutbutter’s driver and later an exec in his business, “PB Livin’”. This situation will persist for a while, and join the two of them together in yet more outlandish schemes. Todd also realises the same thing as Diane – where BoJack is negative and a bit of downer, Mr Peanutbutter is actually nice to people. Sure, he’s also a sunny idiot, but it’s clear for both of them that he brightens up their lives on some level.

Interestingly, Mr Peanutbutter is having second thoughts about his marriage to Diane. He knows he loves her, but after he sees her doubts, he begins to worry – she’s smarter than he is, so maybe she knows something that he doesn’t. He also tells Todd about the dreams he has where Diane is no longer in his life – in them, he feels relief. This might seem at odds with his oblivious nature, but we also learn that he’s been married twice before – he already knows that loving someone deeply is not necessarily enough to make for a long-lasting relationship. Nonetheless, by the end of the episode, they’ve tied the knot, with Diane acknowledging that even though she is stepping into unknown and scary territory, she wants to do it with Mr Peanutbutter beside her.

Summary – Horse Majeure: “You know, sometimes I feel like I was born with a leak, and any goodness I started with just slowly spilled out of me, and now it’s all gone.”