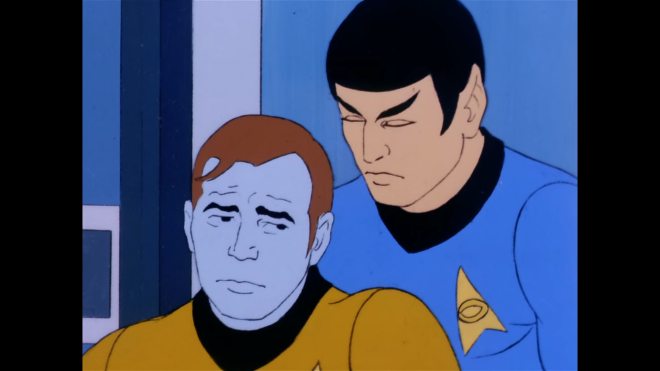 When the Enterprise pays a visit to the planet Dramia, Dr McCoy is placed under arrest for apparently having caused a plague some nineteen years earlier. In the hopes of clearing McCoy, Kirk and Spock launch an investigation – only to encounter a recurrence of the same plague.

When this episode began, I was somewhat hopeful that we’d be in for a decent story. Surely McCoy’s arrest would lead to a classic Star Trek moral dilemma, in which his past attempt to do good had had some unforeseen consequences. Obviously McCoy’s name would be cleared in the end, but he might have to live with a feeling of responsibility.

Unfortunately, this is TAS, and it soon became clear that we were headed in another direction. Kirk and Spock jet off to the planet where the plague occurred, and there they just happen to stumble upon a survivor who can attest to McCoy’s good character. On the way back to the trial, however, everyone except Spock (of course) gets infected with a second wave of this plague – a turn of events that would be deadly serious if not for the hilarious fact that the first symptom is everyone turning blue.

Anyway, with scant regard shown for any sort of containment, Spock rescues McCoy so that they can work together on a cure. At this point you might expect McCoy to put his medical training to good use in isolating and testing a cure, but for some reason this episode chooses instead to depict him as barely competent. McCoy’s research consists of him ordering Spock to look things up in the computer, and then Spock walking him through some basic deductions. To add insult to injury, after the day is saved, the episode closes with some of the least funny Spock-McCoy banter ever to have been written. All in all, it’s a soulless shell of a Star Trek episode.